Holiday Rescue is my first clean billionaire romance and is book one of a trilogy. I am planning two more books in this series.

It's set in Gabriel Mills, Texas, a small town that was located in Williamson County, many years ago. Gabriel Mills was a thriving community in the 1850s that all but disappeared by 1988. All that remains is the cemetery.

After drawing out a map of my fictional city, I've decided to set many of my future works in this made-up location. I hope you enjoy the charm and quaintness of the small town as much as I and my characters have.

Grant, a billionaire CEO and former SEAL, travels to Austin to purchase the company that will make his newest invention possible.

Kidnapping is the last thing on his mind.

But even a former Seal can't fight a tranquilizer gun.

Grant never expects his escape to lead him to the one woman he could learn to love.

Nor did he expect to put her in danger.

Grant Helms, CEO of Helms Security, Inc., tugged on the cuff of his tailored suit and studied the fit in the mirror. “I’m not a fan of pinstripes, but this isn’t too bad.”
His older brother, Kiel, CFO for the company, sat in the visitor’s chair in front of Grant’s desk, watching Grant turn one way, then the other to see the fit of the suit he wore. “You need a new suit for a business meeting?”
Blowing out a loud breath, Grant shrugged. “Collin Dray is exceptionally conservative. I thought maybe a more traditional suit would be best for the meeting.”
“I’d just wear my jeans and a t-shirt.”
“Hence the reason I have to make this trip instead of you. You can’t wear casual when you’re buying a company like Dray Electronics.”
“Maybe, but spending a couple thousand dollars on a suit you won’t wear again is a little much, isn’t it?” Kiel sipped his imported coffee. When Grant shrugged, Kiel grinned. “Couldn’t get Jax to go, huh?”
Grant struggled to keep annoyance off his face. Their oldest brother, Jax, left for Arkansas before lunch. Technically, Jax was the CIO, but all three of the brothers had multiple roles. Until recently, they all took shifts with security details, too. “Jax is on assignment. All the guys were booked, so he took the job in Fayetteville.”
A frown settled on Kiel’s forehead. “I thought we agreed the three of us wouldn’t be involved in the ops, anymore.”
Grant sighed. “Yeah, well, she’s blonde. And we all renewed our PPO licenses, so . . ..”
The frown went away, and Kiel laughed. “Petite and cute?”
“Yeah.” Grant took another look in the mirror, decided the suit would do, and headed toward the restroom to change back into his jeans. “He left me a voicemail. Said if we needed him to call his personal cell. Otherwise, he plans to be out of touch for a few days until he figures out who is stalking her.”
“Hmm. When do you leave?”
“The meeting is tomorrow afternoon. Jax took the jet, so I’m flying the corporate chopper this evening. If you need me, I’ll be staying at Shoal Creek Suites, since they have a helipad on the roof. I’ve already made reservations and arranged to use the roof hanger for a couple of days.”
Kiel’s muffled voice came through the closed door. “Anything I need to take care of while you’re gone?”
Grant carefully returned the suit, shirt, and tie to the garment bag. Kiel was probably right. It was a bit extravagant to buy a suit he wouldn’t wear again, but he wanted to make the right impression on Collin Dray. Finding another source for the part they needed would wreck their production schedule. Grant shook his head. Dray Electronics was the best company for their needs. Learning it was for sale was a stroke of luck.
After pulling on his jeans, he slipped his navy-blue t-shirt over his head. Running his fingers through his short, dark hair instead of bothering with a comb, Grant opened the door and walked into his office.
“You have enough to do with accounting, Kiel. R&D have tested the prototype six ways to Sunday. If Dray agrees to our buy-out, we can make the parts to our specifications. The drone will do exactly what it’s designed to do.”
Kiel raised an eyebrow and gave Grant’s left wrist a pointed stare. “Grandad’s Timex watch doesn’t go too well with the suit, though.”
Grant glanced at the watch he wore. It was the watch Grandad wore through the first years of building up the company. He shook his head. “I’ll just keep the shirt cuff pulled down over it.”
“You could borrow my Jagger LeCoultre if you want to.”
Kiel had expensive tastes. While Grant was more down-to-earth and wore Levi and Wrangler jeans, Kiel shuddered at the thought. Grant grinned and gave Kiel’s Gucci jeans a pointed look. “A twenty-thousand dollar watch to go with a two-thousand-dollar suit? That makes about as much sense as wearing it with jeans and a t-shirt.” Grant preferred to wear their grandfather’s watch. It helped him remember the values the company was built upon. “Nah. I’ll just wear this one.”
“Suit yourself.” Kiel took the last sip of his coffee, set the cup on Grant’s desk, stood and stretched. “I guess I’ll check in with Ms. Miller and see how the Christmas extravaganza plans are going.”
Grant shuddered. “Better you than me.”
Kiel sighed. “Grant . . ..”
“I don’t want to talk about it.”
“Dad and Grandad wouldn’t want you . . ..”
Jaw clenched, Grant glared at Kiel. “Not talking about it.” After his father and grandfather died in the same accident on Christmas Day, fifteen years ago, Grant wanted nothing to do with the holiday.
Kiel huffed and frowned. When Grant opened his mouth, Kiel held his hands up, palms out. “Alright. Alright. We won’t talk about it.” With a sigh, he walked to the office door. “I need to get back to Accounting, anyway. See you later!”
Grant closed his eyes and concentrated on calming his breathing. He didn’t understand how Kiel and Jax could want to celebrate the holiday that took the two most important men in their lives from them. Forcing himself to take deep, even breaths, his shoulders slowly relaxed, but the tight muscles in his neck remained.


Thank you for reading. If you want to read more, you can find the book on Amazon.

Please let me know what you think below! Have a great week!

Lynn Nodima
I can't remember a time that I didn't dream of being a writer. Someday. My entire life, regardless of what happened, whether good or bad, it's been in the back of my mind that events I lived through would someday influence my writing muse. I think that happens with most writers. Conscious or not. While my writing may be influenced by something I read or heard or saw or experienced, I never use real names or write in such a way as to identify any person I have ever known. That's because I write fiction, not biographies. I'm finally making my dreams come true!

Subscribe to Lynn's Clean Romances Newsletter
and receive Cuppa Brew
as a Thank You Gift! 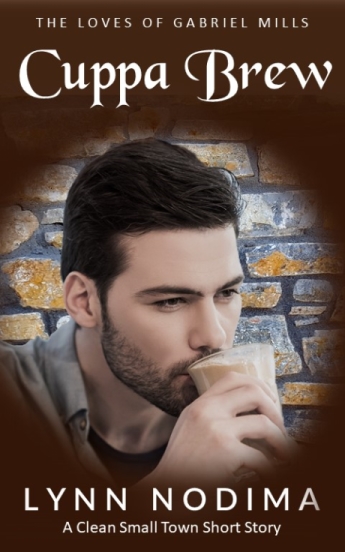 Disclosure Notice
Many of the links on this blog are affiliate links. If you click on any link in this blog and make a purchase, the blog owner may receive a small advertiser's commission at no extra cost to you. Thank you!